Siberian traps and “Permian” anomaly: is there a link?

The origin of Permo-Triassic Siberian trap eruptions is attributed to a deep hot mantle upwelling known as a Siberian plume (SP). Using paleomagnetic reconstructions and geological data, the Eurasia’s position over the SP is retraced, and it has been shown that the plume is likely to be located beneath the eastern part of the East European (EE) lithosphere, where a significant negative anomaly of seismic waves has been observed at the core-mantle boundary. However, the interaction between the plume and the EE lithosphere and a surface manifestation of the plume since Jurassic (about 200 My ago) are still poorly known. We show here that as the EE platform moved above the Siberian plume, vertical tectonic movements recorded in sedimentary basins show uplifts or insignificant subsidence during the post-Jurassic times. We use a simple analytical model of conductive heat transfer in the thick EE lithosphere heated from below for about 150-200 My, compare the results with those related to the thinned West Siberia lithosphere at the time of Siberian trap eruption, and have found that the EE sedimentary basins have been constantly heated for a geological period of time with significant heat flux and elevated temperate in the crust. Moreover, we observe that hydrocarbon basins, including giant oil- and gas-fields, are situated along the retraced path of the plume from West Siberia to the central part of the EE platform. We propose that the EE basins have been “stewing” above the weakening Siberian plume for at least 150 My creating suitable conditions for hydrocarbon generation. This establishes a profound relationship between mantle upwelling, sedimentary basin evolution, heat flow disturbance, and the hydrocarbon generation. Hence we infer that future exploration for shallow or deep hydrocarbons should be concentrated in the areas of mantle plume activity, especially where the lithosphere does not move significantly over the plume for a long period of the geological time. 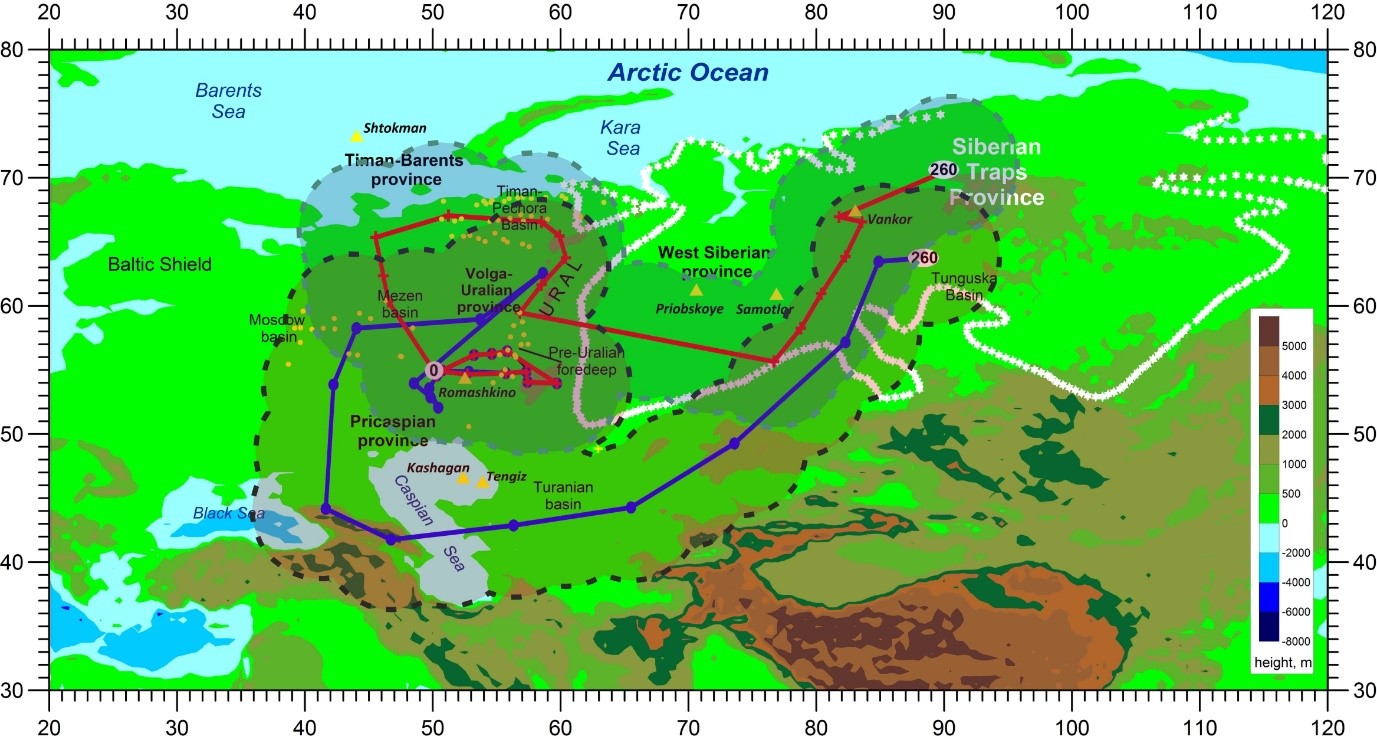 Geographical setting of the studied area showing tracks of the Siberian plume on the Eurasian continent from the position of major eruptions near Norilsk at 250 My ago to the present (Figure by A. Ismail-Zadeh based on J. Bess paleomagnetic reconstructions).